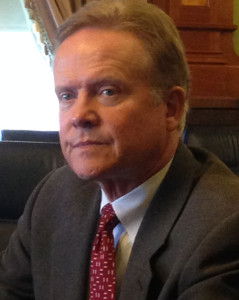 A former senator who is likely to challenge Hillary Clinton for the Democratic Party’s presidential nomination is questioning President Obama’s plans on key trade issues.

Former Virginia Senator Jim Webb today said congress has a right to see the details of the proposed Trans-Pacific Partnership that would impact U.S. trade with a dozen countries before the House and Senate vote on a separate proposal that gives the president authority to negotiate trade deals that cannot be altered by congress.

“I don’t think it’s right for the administration to be trying to move ‘fast track’ ahead of showing this agreement to the congress for its scrutiny,” Webb said.

Webb made his comments during a news conference in Des Moines after he met with Democrats who serve in tbe Iowa House and Senate. Webb told reporters he’s all for a “pivot to Asia” to strengthen relations with places like Vietnam, South Korea, Japan and Singapore.

“That part of the world is vitally important to the United States, but with respect to the TPP agreement itself, I believe the administration needs to show the agreement to the congress,” Webb said.

President Obama is facing growing opposition from his fellow Democrats to the Asian trade deal and Obama, in turn, has warned China will fill the void in the region if the U.S. doesn’t seal with this deal.

Webb held events in central Iowa on Sunday and Monday. Webb told reporters he doesn’t have “a specific date” set for announcing whether he’ll run for president.