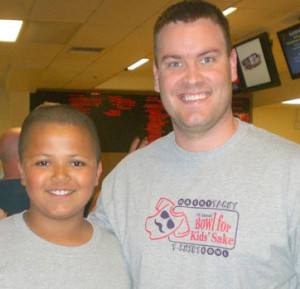 The Siouxland chapter of Big Brothers Big Sisters, which provides mentors to kids in parts of Iowa, Nebraska and South Dakota, has won a national competition and a large cash grant.

The agency’s executive director, Rocky Welker, says he’s thrilled they did so well in the Blue Bunny Helmet of Hope contest, to which hundreds of organizations nationwide applied and the list was narrowed to ten.

“Those ten organizations went to an online vote-off,” Welker says. “You have about eight or nine days where you had to rally your supporters, get everybody together and get as many people to vote as possible. Over those nine days, there were 2.2-million votes cast and when it was all said and done, Big Brothers Big Sisters of Siouxland was one of the top five.”

Each organization in the top five wins $25,000, an ice cream party, and their logo will be placed on NASCAR driver Jimmie Johnson’s helmet at a race in June. The competition was open to non-profit organizations that support K-12 public education. “We were up against a lot of other communities, much larger communities, Los Angeles, Phoenix, Milwaukee,” Welker says. “I think just being in the Siouxland area, we’re a tight-knit community and when one organization or agency needs help, everybody just pulls together and really helped us out.”

Welker says the $25,000 will go toward the Le Mars Lunch Buddies program. “We have a school-based program where these mentors go into the schools once a week with the children,” Welker says. “They have lunch with them, they talk about academics, they talk about how their life’s going, things like that.” There are 11 Big Brothers Big Sisters chapters across Iowa.

The Siouxland chapter has more than 50 kids on its waiting list and more than 40 of them are boys. Volunteers are asked to commit one year to spending four hours a month with their match. Welker says those four hours make a world of difference to the children, many of whom are considered at-risk or perhaps they have a parent who is incarcerated or deployed in the military. Learn more at: www.bigbrothersbigsisters.com

Le Mars-based ice cream giant Wells Enterprises is behind the Blue Bunny Helmet of Hope program, which has contributed more than $685,000 to 76 different charities.