You are here: Home / Fires/Accidents/Disasters / Workers Memorial Day events around the state today 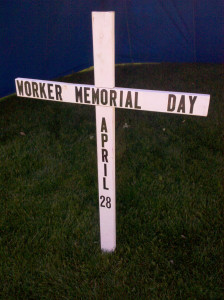 The Iowa Senate paused today to honor Iowa workers who died on the job this past year. It was Senator Dick Dearden’s idea.

“We lost 39 people this year that went to work in the morning and never returned,” Dearden said. “…If we could have 39 seconds of silence in their memory — thank you.”

April 28 has been designated by the nation’s labor unions as “Workers Memorial Day” because that’s the day in 1971 that OSHA — the U.S. Occupational Safety and Health Administration — opened its doors.

“Countless lives have been saved over the years because of OSHA,” Dearden said. “It was bipartisan, a Democratic congress, a Republican president — President Nixon — who signed it.”

Dearden, a Democrat from Des Moines, was an active member of the American Federation of State, County and Municipal Employees union during his career in the state court system. He’s been a member of the Iowa Senate since 1995 and a vocal supporter of the labor movement.

“Today we mourn for the dead and fight for the living,” Dearden said.

Labor unions have events planned at sites around the state. A ceremony was held at 11 o’clock on the state capitol grounds. There was an event at 12:30 on the pedestrian mall in downtown Iowa City. Workers Memorial Day events will be held in Cedar Rapids, Dubuque Sioux City and Waterloo this evening.