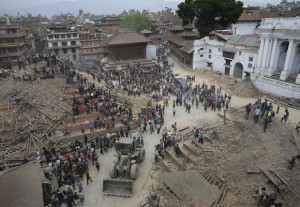 Iowans are warned to be cautious as they donate any dollars to relief efforts following last weekend’s devastating earthquake in Nepal.

Bill Brauch director of the Consumer Protection Division at the Iowa Attorney General’s Office, says he hasn’t heard of any scams in the state yet that involve Nepal relief, but it’s likely some will crop up in the coming days.

“Don’t respond to phone calls asking for donations or pop-ups on the computer or emails that come out of the blue or text messages,” Brauch says. “Do a little research on your own. We recommend folks go to Charity Navigator. It’s a website that evaluates charities and they have some very solid recommendations.”

Millions of people were impacted by the 7.8 magnitude earthquake, including tens of thousands left homeless, 6,000 injured and at least 4,500 dead. One report estimates the death toll may reach 10-thousand. After cataclysmic events like this, Brauch says Iowans want to help and they’ll often stick with agencies they know, which is fine.

“Certainly, the Red Cross is one of the best places to go,” Brauch says. “There’s a group called United States Fund for UNICEF. There’s another called World Help. Direct Relief is another entity that will be helping under these circumstances.” In addition to avoiding unsolicited pop-ups, phone calls, emails and texts, Brauch says to be very wary of anyone who claims to be collecting clothing to send to Nepal.

“The ability to get anything to the victims is extremely limited right now and you really want to focus on giving dollars to trusted organizations,” Brauch says. “They’ll get more bang for the buck. They’ll be able to go out and buy more food and drinking water and other supplies that folks are going to need.”

When making a donation, make sure the charity has a secure website so your personal banking information isn’t compromised. Also, be sure you’re on the real charity’s website, not a fake site that uses the non-profit’s logo but with a name that’s slightly different. Find out more at: www.charitynavigator.org