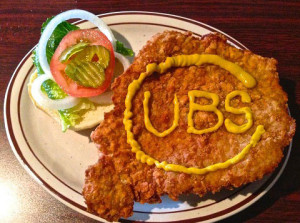 “Really, breaded pork tenderloin sandwiches are just a staple, a Midwest favorite, and we’re simply on the search for the best one in the state,” Sutter says. “If you have one in your community that you think is fantastic and goes above and beyond, we’d love to know about it.” Last year, a record 98 sandwiches were judged in the contest with nearly two-thousand nominations received.

Last year’s winning tenderloin was from The Lucky Pig Pub and Grill in Ogden. Sutter says there will be a change in this year’s judging process so it’s assured the finalists come from all over the state. “We’re going to take the top five that are nominated in each of our eight districts,” she says. “Iowa Pork Producers has eight districts across the state, so we’re going to judge 40 sandwiches this year, the top five from each district.”

This is the 13th year for the contest. It’s open to any cafe, restaurant or tavern that serves hand-breaded or battered pork tenderloins on its core menu. The deadline for nominations is June 8th. The winner will be announced in October. For more details, visit: www.iowapork.org.