You are here: Home / Human Interest / Dog found in Cedar Rapids reunited with family in Louisiana 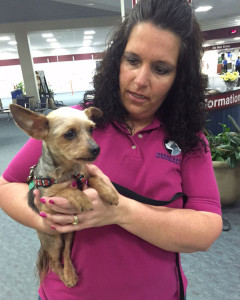 A dog that wound up at an eastern Iowa animal shelter earlier this month somehow strayed nearly 1,000 miles from home. The tiny Yorkshire Terrier is now reunited with his family following a long journey that may remain a mystery.

Cedar Rapids Animal Care and Control Program Manager Diane Webber says the dog was brought to the shelter on April 14. The Yorkie had a microchip which connected him to a family in Louisiana.

“When we called them, they told us they had been missing the dog for over three years,” Webber says. “We just never had something like that happen before.”

Veterinarians spent a couple weeks improving the dog’s health and recently determined he was well enough to be reunited with his family. But, the family would need some assistance in being able to get the dog back to health and transported back to Louisiana.

Webber says many people pitched in to help, including United Airlines — which made arrangements to fly the dog and Animal Control Program Specialist Michelle Johnson first class on a flight from Cedar Rapids to New Orleans this morning. “There were even some substantial donations made to the family to help with veterinary costs once he gets home because he is going to need some follow-up care,” Webber says.

When staff at the Cedar Rapids shelter called the dog’s owners, the woman who answered said the dog was given to her daughter for her birthday 10 years ago. Her daughter is now 15 and hadn’t given up hope that her dog, named Sam, would someday return. Sam disappeared from the family’s fenced-in yard more than three years ago. “So, we’re not sure and they’re not sure if he was taken or if he somehow got out of the fence, was lost, and somebody picked him up and just never reported him found. We don’t know,” Webber says. “No one here (in Cedar Rapids) has called looking for him either. So, it’s kind of a strange situation all around.”

A crew with NBC’s Today Show planned to be in New Orleans this morning to cover the family’s reunion with their dog.