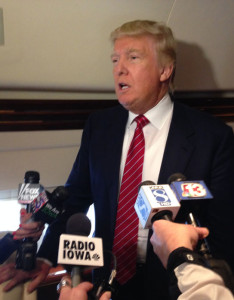 Real estate tycoon and reality TV star Donald Trump is returning to the state today, to headline an evening fundraiser in Cedar Rapids for Secretary of State Paul Pate.

Trump has hinted in years past that he might run for president, but Trump has made more trips to Iowa lately and he hired a battle-tested Iowan as a campaign advisor. Chuck Laudner told a crowd this weekend that he signed on with Trump because he’s tired of conservatives being out-maneuvered by both Democrats and the GOP’s establishment.

“You want to know the simple reason I’m working for Donald Trump?” Laudner asked. “Because sometimes you’ve got to shake and rattle that cage to remind them that…they work for us. Folks, we are going to build something very, very special here.”

Laudner has worked for Congressman Steve King and he served as executive director of the Iowa Republican Party for the 2008 election cycle. Laudner is credited with helping Rick Santorum vault to Iowa Caucuses in 2012. In 2010 Laudner managed the effort that convinced a majority of Iowa voters to unseat three justices from the Iowa Supreme Court because of the court’s same-sex marriage ruling.

“But there were a lot of people at that time that said: ‘Don’t do it. You can’t win. You’re never going to convince people to vote no. You’ll never work in this town again,’ so now I think you’re starting to see a pattern develop here, that what these campaigns and a whole host of others that I worked on had in common was that they’d had it up to here and they weren’t going to take it anymore,” Laudner says. “So, why am I working for Donald Trump? Because I’ve had it up to here and I’m not going to take it anymore.”

Laudner made his comments at the Iowa Faith and Freedom Coalition’s spring kick-off this past weekend. Laudner was given a few minutes behind the microphone to speak on Trump’s behalf.