You are here: Home / News / Rayhons visits statehouse, talks about trial and his late wife 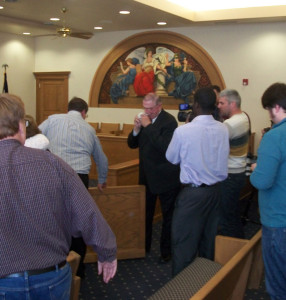 Rayhons after the verdict in his trial.

The former legislator who was acquitted on sex abuse charges last week says he believes his late wife, who suffered from dementia, would be alive today if she hadn’t been placed in a nursing home. Henry Rayhons of Garner is visiting friends at the statehouse today and he spoke with capitol reporters early this morning.

“Her daughters decided they wanted her in a care center, but I know she would have been better, she’d have with us yet if I could have taken care of her at home,” Rayhons said.

Rayhons and his wife, Donna, were both widowed when they married in December of 2007. In March of 2014 Donna’s daughters moved her into a nursing home. Rayhons was accused last May of having sex with his wife when she could not consent. Donna Rayhons died last August.

“She didn’t know when it was time to eat, but she was doing excellent at home, but I had to deal with her two daughters and I know she loved her two daughters, also. but her love for me just grew and grew and grew in the time we were married as you could see here in the capitol,” Rayhons told reporters this morning. “She was always with me.”

Rayhons said as his late wife’s Alzheimer’s worsened, he bought a new condo in Garner which was easier for her to navigate because it didn’t have steps.

“She would have been fine at home,” Rayhons said, “but I wasn’t allowed to do that.”

Rayhons said the support his family sustained him through the ordeal of being charged with abusing Donna and going to trial eight months later.

As Rayhons spoke with reporters today, he nearly broke down in tears as he talked about mourning his first wife and about meeting Donna in the church choir.

“We have what we call the sign of peace in Catholic Church masses and she started giving me a kiss then,” Rayhons said. “And she got nicknamed by the priest as ‘Smoochie’.”

After Rayhons proposed, Rayhons and Donna met with that same priest to begin six-months of pre-marital counseling.

“He looked at us he says: ‘What are you waiting for? I’ve watched you two together all the time,'” Rayhons said.

The couple married about two months later. Rayhons is singing in the church choir again for weekend masses and is part of a smaller choir that sings for funerals as well. Rayhons will have dinner this evening in Des Moines with two women who he employed as clerks during his legislative career and another clerk who worked for the legislator who sat next to him.

Next week, Rayhons and his family will gather at a Mason City restaurant to celebrate his 79th birthday.