You are here: Home / Sports / Iowa partnership has horses in 3 key races, including the Kentucky Derby 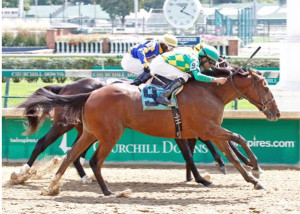 An Iowa partnership will have horses in the three signature races at Churchill Downs in Kentucky this weekend.

Des Moines lawyer Jerry Crawford is the spokesman for the group know as Donegal Racing that includes 20 others. The group’s first horse, Puca races today  in the Kentucky Oaks.

Donegal has had a horse in the big race — the Kentucky Derby — three of the past six years. Crawford says that’s a pretty good accomplishment when you look at the numbers.

“There are about 35,000 thoroughbred race horses born each year, and 20 of them make it to the Kentucky Derby,” Crawford explains. He says the Iowa group uses a formula much like the “Moneyball” formula touted in baseball to look at the genetics of horses.

“By studying genetics you can usually eliminate two-thirds of the field in any Kentucky Derby because they’re just not bred to run a mile-and-a-quarter. And the derby is a mile-and-a-quarter-long race, and its’ the first time in their careers that they have ever run that far. So you don’t have any opportunity to see how they’ve done previously,”Crawford says. “But you can through genetic study figure out who can’t in all likelihood run that far fast enough.”

Crawford admits Keen Ice is a long shot to win the 141st Kentucky Derby, but he also believes there are some things that give the horse a chance. “He won his first race here at this track at age two last year, he loves this race track,” according to Crawford.”One thing that people who aren’t involved in the business don’t realize, is different horses run better on different tracks, and this is a surface that he has always really enjoyed.”

Prairie Meadows Racetrak in Altoona and the Dubuque Greyhound Park are both simulcasting the Kentucky Derby and allowing Iowans to bet on the race. The race begins at 5:34 p-m Iowa time. The other Donegal investors are: