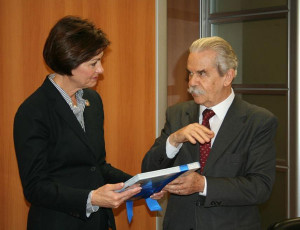 Lieutenant Governor Kim Reynolds is heading back to Iowa tomororw with 15 other Iowans who’ve been on an eight-day trade mission to Brazil.

“It’s been an exceptional trip. It’s been a busy trip, but we had a great delegation and we’ve had the opportunity to visit some Iowa companies that are located in Sao Paulo,” Reynolds said during a telephone news conference this morning.

The city is located in the southeast part of Brazil and is considered the country’s wealthiest region. Brazil, the world’s fifth largest country — population wise, is in an economic slump.

“I think there’s tremendous opportunity for foreign direct investment back in the state,” Reynolds said.

According to Reynolds, it’s somewhat difficult to do business in Brazil, due to high tax rates and “ever changing” government regulations and Reynolds said she got interesting feedback from Brazilian business leaders after she explained Iowa’s tax and regulatory environment.

“The government here is just not that business friendly,” Reynolds said. “And they really, really talked to us at various points throughout the trip on how struck they were by the partnership and really the environment we work to put in place to really help our industries grow so we can create jobs and grow the economy and create the quality of life for Iowans. I had several individuals point out how that was such a contrast to what they’re seeing in Brazil.”

Later this month, officials from Brazil will be visiting Iowa. The leader of Sao Paulo’s Federation of Industries will tour Iowa biofuels plants and a separate delegation of Brazilians will meet with “various businesses” in Iowa.

“At this point, I’m not at liberty to talk about what they’re looking at,” Reynolds said.

During the trip, Reynolds visited facilities in Brazil being operated by Iowa-based businesses like Kemin Industries, Rockwell Collins and Vermeer.

Photo courtesy of the Lt. Governor.