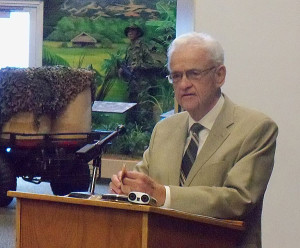 The Iowa Gold Star Museum unveiled its new Vietnam War exhibit Thursday, on the 40th anniversary of the end of the U.S. involvement in the war.

Former Iowa Congressman Leonard Boswell flew helicopters in Vietnam during the war and retired as a Lieutenant Colonel. He talked with Radio Iowa about the feelings among soldiers as they watch the fall of Saigon and the war end.

“There was heavy thoughts and we found we were reflecting to start with on our comrades who had fallen in that conflict — that number was pretty large — and just wondered who makes the decisions about what was going on at times,” Boswell says. In remarks before the ribbon cutting for the exhibit, Boswell told the Vietnam veterans that they had never lost a battle, it was those back in Washington making the decisions who decided the fate of the U.S. in the war. Boswell says the troops on the ground and in the air gave their best effort, but had to follow the orders from higher up. 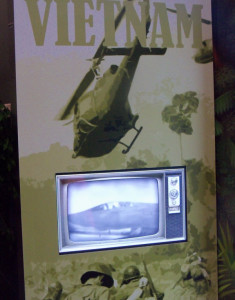 Vietnam was the first “TV war.”

“We’d be in a battle and we’d be getting the upper hand and we’d get called off because there was supposedly some border right below which we couldn’t see. It was frustrating,” according to Boswell. Boswell says the advent of television coverage of the war was part of the problem, as the commanding general in Vietnam, William Westmoreland, had a TV camera over his shoulder all the time.

He says he grew to understand some of those issue more after being elected to the U.S. House and going to Washington, D.C. “They could see what was going on every day. Now when the generals were conducting what was going on in World War Two and before that, and then in Korea, why it was the matter of waiting for a message to get back and forth,” Boswell says. “But every morning (during the Vietnam War) the White House, the Pentagon, they were getting briefed right then that day. I would guess there was a lot of Monday morning quarterbacking took place.”

Boswell talked about what it was like to be involved in the war. “There’s hours of boredom interrupted by moments of stark terror,” Boswell says. “There was always shooting going on, it was very intense. You were always relieved when that moment was over with.” 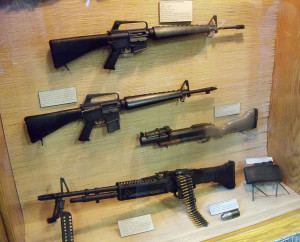 The exhibit features weapons used during the Vietnam War.

Michael Booker of Des Moines was 19 when he served in Vietnam with the 4th Infantry Battalion from 1967 to 1968. He remembers his feelings seeing Saigon fall and the war end in 1975 as the South Vietnamese were overrun. “It made me kind of sad to see all of our effort almost went to not because they did not stand and fight Ho Chi Mihn,” Booker says.

Reflecting back on his service, he says he would do it again, as he fought to help preserve freedom. “And I feel that going over there and doing I feel as thousands of other men and women who served, they felt the same way, there was a pride in going over there and doing something to hold our rights and freedoms that we have, our liberty that we have here and preserve it. And let other countries of the world are going to know that we are not going to back down and that you have to fight too, also, you have to come along with us,” Booker says.

He says leaving Iowa to fight in the jungle thousands of miles away was a huge change for someone who was not yet 20. “It was a tremendous shock,” according to Booker. Booker says he left behind a car and the freedom to go anywhere and do anything he wanted and that made an impression. “You know you’d reminisce and think about what you were doing back home before you came over here and all of a sudden those things you had were not there,” he explains. “It made you more determined to fight, because those things you had there you didn’t want to lose them.” He says the experience quickly makes you grow up. “Yes it does, you become a man soon. I mean, because it’s a life or death situation,” Booker says.

The exhibit at the Gold Start Museum includes a helicopter like the one Boswell flew in Vietnam. It also has displays of weapons that Booker recognized as the ones he trained on and then used once he got to Vietnam.