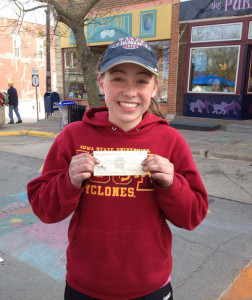 An eastern Iowa town of 4,500 is hosting more than 8,000 visitors this weekend for its tenth annual Chalk the Walk Festival. Joe Jennison is a spokesman for Mount Vernon where the streets and sidewalks will become the canvas for dozens of incredible works of art using about a half-ton of colored chalk.

“We have about 150 artists coming to Mount Vernon this Saturday and Sunday and each of these artists will be doing one 8X10 (foot) piece of artwork in chalk on the ground,” Jennison says. “These artists were selected through application and they come from all over the region.”

This year also marks the 85th anniversary of Iowa’s most famous piece of art, “American Gothic.” A 20-by-40-foot version of Grant Wood’s classic painting will be recreated by festival attendees. The giant portrait will be outlined and subdivided into two-foot-by-two-foot squares. 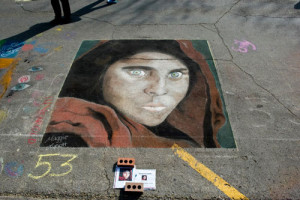 Jennison says, “We have an artist that creates, in essence, a giant coloring book so anyone can get on their hands and knees and do this one square and at the very end of the festival, we’ll stand around it and hold hands and we’ve created this wonderful piece of public art together.” The chalk art is very fragile and a good rain shower can quickly wipe out hours of labor, so Jennison was asked about the possibility of rain in the forecast.

“We never use the ‘R’ word when talking about Chalk the Walk,” Jennison says. “This our 10th anniversary and in 10 years, we’ve only had one total rainout and that was our 2nd year. Last year, we got some rain on Saturday night but all of the artists came back on Sunday and all we had to do was a little touch-up and keep going.”

The two-day festival is billed as Iowa’s largest-ever Madonnari Festival. It’s based on an original art form that began in 16th century Italy. This form of public art was originally done by street artists hoping to collect coins from passersby. Images were based on religious themes and as the Madonna was a popular subject, the artists became known as the “Madonnari.”