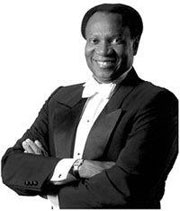 Iowa native and world-renowned opera star Simon Estes is marking a milestone. It was 50 years ago that he performed before an audience for the first time — at a concert in Germany.

His first show was at the opera house in Berlin on April 19th, 1965. Estes says he celebrated his five decades-long musical career in southern Iowa about two weeks ago.

“We had thought about maybe trying to go back to Berlin and do a big concert or something at the opera house but they already had a performance scheduled,” he says. Aside from that, he was already committed to performing at Graceland University in Lamoni, so that’s how he marked the anniversary.

From performing before presidents and popes, the Centerville-born Estes said it’s hard to believe it has been this long to entertain before millions of people. “I never dreamed I’d get farther east than Chicago, Illinois, my whole life when I was a child, growing up here in Iowa,” Estes says. “Since I started singing opera, I’ve sung on every continent on this planet except Antarctica and the penguins haven’t invited me there yet but I wear their costume once in a while.”

For the past four years, Estes has performed in a series of “Roots and Wings” concerts to benefit various Iowa county foundations with scholarships for high school students. He has performed in more than 40 Iowa counties so far with his next concert scheduled in Webster City on May 10th.