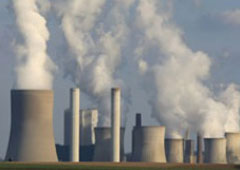 A new report on air quality from the American Lung Association shows significant improvement in what Iowans are breathing, compared to last year. Mike Kolleng, manager of the organization’s Healthy Air Campaign, says Davenport ranked among the nation’s worst metro areas for short-term particle pollution in 2014, but it’s in much better shape according to the latest report.

“It is definitely a positive thing,” Kolleng says. “Davenport and the Quad Cities area hit the bottom 25 last year, I believe they were 23rd in the country. To move off that list shows we’re definitely seeing a lot of positive trends coming out of Iowa, especially in that eastern portion of Iowa.” Overall, Iowa’s 99 counties have experienced fewer unhealthy days of high ozone, or smog, in the past year and fewer days when short-term particle pollution has reached unhealthy levels.

“Iowa bucks the trend from the national standpoint,” Kolleng says. “We have annual particle pollution which has been dropping all across the country which is a very positive trend, and Iowa follows that trend, but unfortunately, with the rest of the country, what we’ve been seeing is that ozone days and particle pollution days have been on the rise, but in Iowa, we’re continuing to see positive trends.”

Several factors are involved, he says, including Iowa’s increasing reliance on alternative energies like wind and solar as well as our use of renewable fuels like corn-based ethanol. As you’d expect, the areas of Iowa that show the cleanest air are very rural, while urban areas are more gray. Kolleng says, “When you have pollution levels from exhaust from cars, you have pollution from smoke stacks and power plants, things of that nature that are emitting a lot of carbon, you’re getting that perfect storm where ozone levels are going to start going up, linked with climate change.”

Reducing pollution will only become more challenging, Kolleng says, because warmer temperatures raise the risk for ozone and particle pollution, and they’ll make cleaning up the air harder in the future. He says Iowa needs stronger air quality standards to limit pollution — and continued cleanup of the current sources of pollution — to protect the health of Iowa’s citizens. See the county-by-county breakdown for Iowa and any other state at the website: State of the Air-dot-org.