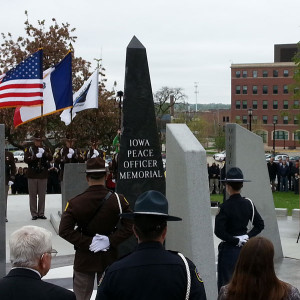 Fallen law officers are remembered at an annual ceremony on the capitol grounds.

Four Iowa law enforcement officers who were killed in the line of duty will be honored in a ceremony on the statehouse grounds this week.

A news release issued today by the Iowa Department of Public Safety shows the four officers who will be honored all died between 1917 and 1945.

The annual Peace Officer Memorial Ceremony will take place this Friday at 10 a.m. outside the Oran Pape State Office Building in Des Moines.

The governor has ordered that flags on the capitol complex be flown at half-staff Friday in advance of the ceremony.