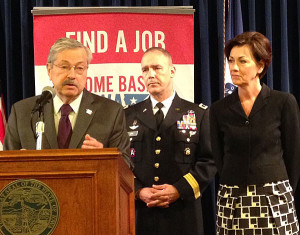 Three more Iowa counties, two community colleges and the city of Johnston have been designated as “Home Base Iowa Communities.”

The designation is awarded to areas of the state that have developed targeted hiring practices and incentive packages that encourage veterans to live and work in the community or the county. Iowa National Guard Adjutant General Timothy Orr says the regular military is downsizing and this program helps attract those soldiers to enlist in the Iowa Guard.

“Since Home Base Iowa and even before Home Base Iowa, because of these incentives, we’re averaging right now about 10 soldiers, service members that are coming off active duty that are continuing service in Iowa,” Orr says.

That’s 10 new Iowa Guard recruits a month. To spur that enlistment rate even higher, the Iowa Guard has partnered with businesses like Vermeer, Nationwide and MidAmerican and with William Penn University in Oskaloosa to host job search boot camps at some of the nation’s largest military installations. Lieutenant Governor Kim Reynolds says the first event is scheduled for May 19 and 20 at Fort Hood in Texas.

“The first day will include in-depth career assessment, resume assistance and mock interviews and this is all designed to help assist transitioning service members in landing great opportunities after their service,” Reynolds says. “It will help make connections with Iowans as well as Iowa businesses.”

Up to 6000 soldiers at the Texas base are expected to participate. Similar events are being planned at Fort Bragg in North Carolina and Fort Benning in Georgia.

“We’re also eager to see how Home Base Iowa can continue to grow as we strive to be the state of choice for military members and families,” Reynolds says.

“We’re proud of the progress that we’re making with Home Base Iowa,” Branstad said. “…The bottom line is we have employed over 1300 veterans since we started this program.”

The state tracks those hires through companies that are part of the Iowa Business Council and from veterans who’ve sought work through the Home Base Iowa website. Officials aren’t tracking how many of those veterans are new Iowa residents. Branstad today announced Kirkwood Community College and North Iowa Community College have taken steps to make it easier for qualifying veterans to take classes and get financial assistance.

The governor has also asked the legislature to provide half a million dollars in state funding to market the Home Base Iowa program.