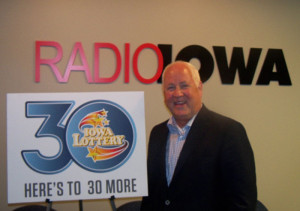 The Iowa Lottery has released a new ticket as part of the celebration of its 30th birthday later this year. Lottery CEO, Terry Rich, says the process had to first be made legal before they could start selling tickets.

“In 1972 the (Iowa) constitution was changed to actually allow lotteries. Thirteen years later, the legislature passed a law and the governor signed a bill to allow the lotteries,” Rich says.

The state began selling a one-dollar “Scratch, Match and Win,” instant-scratch game ticket on August 22nd at the Iowa State Fair. The lottery has introduced a scratch ticket in honor of the anniversary that Rich says is eco-friendly. He says the ticket is made with partially recycle paper and is called “30 Somethings” ticket that will have a top cash prized of $30,000.

The Iowa Lottery has expanded from that first scratch ticket to multiple scratch tickets, pull tabs and various lotto games that have generated lots of money. “In its 30 years there were $6.3 billion in sales, $1.6 billion given to the state of Iowa to use,” Rich says.

Rich says the money from the lottery is handled differently than money from casinos, which is handed out by the non-profit casino partners. The money from the Iowa Lottery is dedicated to backing the Vision Iowa program bonds, some goes to the Iowa Veterans Trust Fund, and all the rest goes to the general fund. “I really like that model because then we run this like a business with the integrity and the social impact always at the back of our mind, and the legislature decides where the money goes,” according to Rich.

Rich says lottery tickets are an affordable entertainment option for people, and says when the economy slows, lottery ticket sales pick up. He expects the Iowa Lottery to continue evolving with changes in technology. “I would say in 30 years if I could predict what the lottery would be like, I think it would be less paper, more social, and hopefully we’ll have an answer to this mystery of the Hot Lotto,”Rich says.

Rich refers to the Hot Lotto ticket which was turned in just before it expired on December 29th of  2011, but the prize was never paid out as the true owner had not been revealed. An employee of an Iowa Lottery vendor, Eddi Tipton of Norwalk, was charged in January with two counts of fraud in connection with the attempt to cash in the ticket.Tipton goes on trial in July of this year.

Overall, figures from the Iowa Lottery show 127 people have won prizes of one-million dollars or more in the 30 years.