You are here: Home / News / Severe weather hits part of Iowa during the night 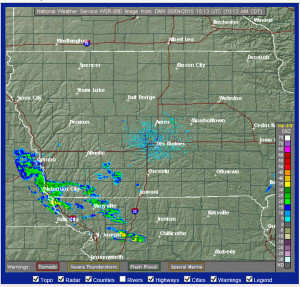 The National Weather Service says we could see thunderstorms throughout the week.

Large hail, high winds and heavy rain came with last night’s thunderstorms that rumbled across much of Iowa.

Small says more thunderstorms are likely later today and practically every day this week. “Of and on through much of the week, we’ll have some storms, mainly tonight more than today, and there may be a break late Tuesday and Tuesday night,” Small says. “Other than that, the forecast for the week and into next weekend looks stormy with several periods of showers and thunderstorms.”

At least one tornado was reported in eastern Nebraska last night, along with some areas getting three inches of rain.