You are here: Home / Fires/Accidents/Disasters / Above and Beyond Cancer to raise funds for Nepal earthquake relief 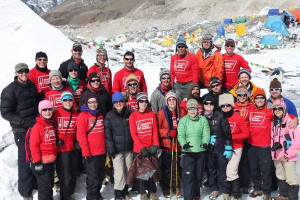 Above and Beyond Cancer group in Nepal in 2011.

An Iowa-based group called Above and Beyond Cancer is turning its attention to earthquake victims in Nepal. Brad Anderson is a spokesperson for the organization headquartered in Des Moines.

“Above and Beyond Cancer is based in Iowa, but was really born in Nepal when we took 14 cancer survivors on a journey to Mount Everest base camp in 2011,” Anderson says. “We’ve been to Nepal twice and have made some incredibly close friends in the region, many of whom are now homeless.”

The earthquake that struck Nepal on April 25 is blamed for 7,250 deaths, while more than 14,000 were injured. The quake destroyed or badly damaged nearly 300,000 homes. Above and Beyond Cancer has organized a concert to benefit the citizens of Nepal. The event, featuring three bands, is scheduled for this evening and all of the proceeds will go to the nonprofit AmeriCares.

Anderson says they chose AmeriCares because the organization has a “team on the ground” in Nepal. “For example, right now, the people of Nepal…a lot of them are forced to sleep together in tent communities and so AmeriCares is offering vaccines, tetanus shots, and important medical services to basically help keep diseases from spreading throughout the region,” Anderson says.

Tonight’s benefit concert is taking place at the Des Moines Social Club starting at 5 p.m. General admission tickets to the event are $20.15, while VIP tickets are $201.50.