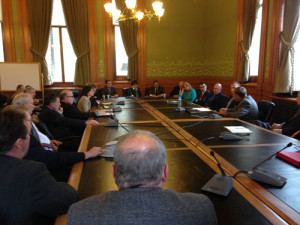 The director of the Iowa Economic Development Authority is offering to be a go-between to find out more about the hundreds of layoffs at the Iowa Fertilizer Plant construction site in southeast Iowa.

Debi Durham met with a dozen union leaders and a handful of Democratic senators late Monday afternoon at the statehouse.

“I will be the honest broker here,” Durham said at the end of the half-hour long meeting. “I will go to the company and say: ‘There’s a lot of unrest. There’s a lot of misinformation.’ And encourage them to meet with you and resolve that.”

Nearly 1,500 workers were laid off April 18. Ryan Drewer, president of the Southeast Iowa Building Trades Council, said many of those workers thought they’d be re-hired by the new contractor tapped to finish the job, but Facebook posts seem to be seeking replacements from Texas and Louisiana.

“You know, it makes us very uneasy to see it taking a direction like this and it’s concerning to us,” Drewer said.

Orascom — an Egyptian company — is building the plant near the town of Wever. The company got nearly a half billion dollars in local, state and federal incentives for the project. Leaders of the unions who represent laid off workers say they’ve been unable to get answers as to why the layoffs happened and how many construction workers might be rehired.

“Orascom is like a ghost. They’re tough to meet with,” said Jerry Hobart, business manager for Local 125 of the Plumbers & Pipefitters Union. “We’ve had our national reps, trying to get with them and it’s just been tough to talk to them directly.”

Senator Rich Taylor, a Democrat from Mount Pleasant who represents the Wever area, was among the seven senators who attended the meeting.

“This isn’t a little plant that builds widgets,” Taylor said. “…If we get a bunch of non-skilled workers in there, that safety aspect to Lee County — it could be devastating.”

Other senators suggested it was implied that Iowans would be hired to build the plant when the project was “sold” as worthy of state support. Durham, the state’s top economic development official, said the incentives are tied to overall capital investment and eventual full-time employment levels at the plant once it opens — and the deal does not hinge on the contractors the company hires to build the facility.

A company hired to work on electrical and mechanical elements at the fertilizer plant was fired on Friday, April 17. Three other subcontractors already working on site were hired to complete the work. According to a memo from Orascom, it is common in “projects of this size” to “exchange subcontractors.”

The Iowa Fertilizer Plant will employ about 240 people full-time once the plant starts producing nitrogen fertilizer and diesel exhaust fluid.