You are here: Home / Health / Medicine / GOP candidate Carson: ‘I don’t want to be a politician’ (AUDIO) 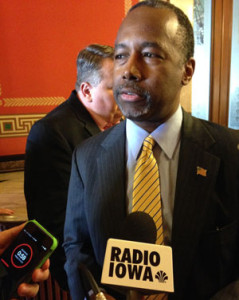 “Game plan is just to meet people. Talk to the people, talk to the legislators. Find out what’s on people’s minds,” Carson said this morning. “The main thing I want to know is what are people most concerned about, what are they worried about and if anybody has any good solutions, I want to hear them.”

Carson met with Republican legislators early this morning. He’ll give a midday speech in Des Moines, then make appearances in Cedar Rapids late this afternoon and in Davenport this evening.

“This will not be my last visit to Iowa, that’s for certain,” Carson told reporters this morning.

Carson is a retired surgeon. He and Kentucky Senator Rand Paul, an ophthalmologist, are the first doctors to emerge on Iowa’s presidential campaign stage since former Vermont Governor Howard Dean left it in 2004.

“I don’t agree with him on much of anything, but I do have some admiration for him because he tends to be a straight shooter and I think straight shooting is good,” Carson says. “In his case, it lets us see that he’s the wrong candidate.”

Carson plans to “draw a distinction” in the crowd of GOP candidates by emphasizing that he’s never held elected office.

“I don’t want to be a politician, never planned to become one because they have a tendency to be political and to always have their finger in the air seeing which way the wind is blowing and to try to say the right things,” Carson said. “And I’m not sure that’s actually going to help our country right now.”

Carson, the only African-American candidate in the Republican field, is a Detroit native who was raised by a single mother. He vaulted into the spotlight when he spoke at the National Prayer Breakfast in 2013 and criticized Obama Administration policies, as the president sat on the stage listening. Carson headed the pediatric neurosurgery unit at Johns Hopkins. According to his campaign website, he performed the first and only successful separation of Siamese twins joined at the back of the head in 1987.

Former Texas Congressman Ron Paul worked as a gynecologist until the 1980s, when he became a full-time politician and five-time presidential candidate.