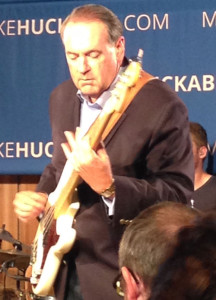 Over 250 people gathered in a historic central Iowa barn tonight to eat barbecue and listen to a Republican who’s running a second campaign for the White House.

Mike Huckabee came on stage with a bass guitar and played Stevie Ray Vaughan’s “Pride and Joy” with the band that had been warming up the crowd.

Huckabee then shed his guitar and launched into a speech to rally the troops. He made no direct mention of his 2008 Iowa Caucus victory.

“I’m glad to be back in Iowa. It’s good to be back,” Huckabee said, to applause and cheers.”You know the craziest thing I’ve had to deal with over the past several months is people have said: ‘Well, I don’t know if I’ll be with Huckabee or not. I’m just not sure he’s going to run.’ And I’m thinking: ‘How many bread crumbs have I got to leave on the trail before the birds get the idea here?'” 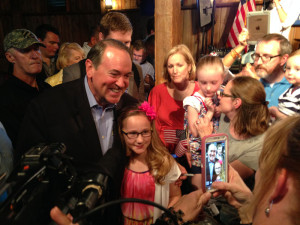 Huckabee cast himself as a defender of the “forgotten and forsaken” heartland. He called for term limits for congress and promised to fight any effort to cut Social Security benefits. He emphasized his executive experience in state government and his battles against the “Clinton machine” in Arkansas.

Huckabee suggested there had been a worrisome values shift in the country that must be addressed.

:It’s really about making sure that in 2016 America comes to its senses and once again believes that common sense is the way we need to be governed,” Huckabee said.

Huckabee is due to campaign in Sioux City and Cedar Rapids Thursday.