You are here: Home / Fires/Accidents/Disasters / Men honored for saving kids from Evansdale fire 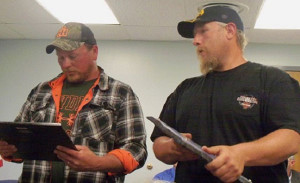 Two men who rescued two young children from a burning duplex in Evansdale last month have been recognized for their life-saving efforts.

Forty-two-year-old Travis Moen of Janesville and 35-year-old Ryan Siems of Waverly were honored by Evansdale Fire Chief Ryan Phillips at a city council meeting. Each man was given a framed citation and other items from the fire department.

“It’s a pretty big honor to get something like that,” Phillips said. “It’s something they’ll hopefully never get again.” Phillips described both men as “reluctant heroes,” but their actions deserve to be recognized. “They didn’t really want to come. They aren’t really publicity sort of people. I talked them into coming and they obliged by it anyway,” Phillips said.

Siems works for the concrete company that Moen owns. The two men were preparing to pour concrete on a residential driveway near the Evansdale duplex on April 6, when fire broke out inside one of the two two-story apartments. “They ran into the fire, a fully involved fire,” Phillips said. “They grabbed the two kids who didn’t know about the fire, pulled them out to safety and saved their lives.”

The fire started in an upstairs bedroom and spread quickly, filling the apartment with flames and thick smoke within seconds. No one was injured in the blaze, but according to Phillips, the result would have been different had Moen and Siems not acted as quickly as they did.

Moen and Siems received a standing ovation from city leaders and the people who filled the council chambers. Phillips also plans to submit the men’s names for the Governor’s Livesaving Awards, which are traditionally presented during a ceremony at the Iowa State Fair.