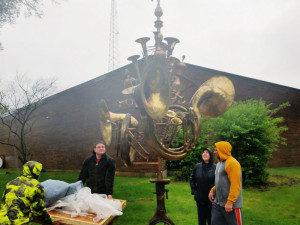 Several new sculptures have been added to downtown Mason City.

Work crews are installing the third edition of “River City Sculptures on Parade” in Mason City as 26 new sculptures are being set up in the downtown area, bringing the total number on display to 40. Jacque Frazee of Milbank, South Dakota, has taken part in previous displays and says the project is being well-received by Midwestern artists. 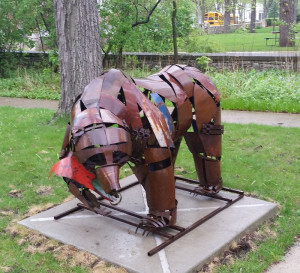 Frazee says the artists were talking a few nights ago about what the community has been able to do, as well as being impressed with how much some of the sculptures have sold for after being on display. Some sculptures in the current crop are priced at nearly $30,000.

Frazee says artists enjoy being able to showcase their art in communities like Mason City. “It’s awesome to be able to have it to go somewhere…people will complain about this and having the artist there, but we aren’t really making any money on this,” Frzee says. 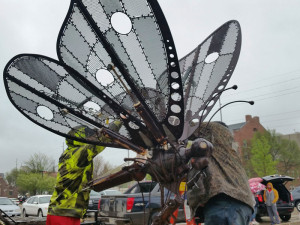 Serge Mozhnevsky is from suburban Vancouver, British Columbia. This is the second time he’s had sculptures in the event but it’s the first time he’s visited Mason City. He says the community has taken the lead of a number of other cities that are bringing in art.

Mozhnevsky says he’s impressed by Mason City’s approach and appreciation for the art. He says it’s part of a new movement for communities to bring an uplifting spirit, as well as an opportunity for sculptors to be a part of a community. Learn more at: www.sculpturesonparade.com.