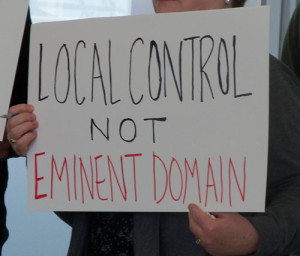 A sign held by a protester against the Baaken oil pipeline.

The Government Oversight Committee in the Iowa Senate has approved legislation that would give a bit more ammunition to landowners fighting a proposed oil pipeline and a high-voltage electric transmission line that would pass through hundreds of Iowa properties.

If the bill becomes law, landowners along the route who cannot afford a lawyer would be able to get one — at the energy company’s expense — plus the projects would have to get permission from 75 percent of affected landowners before the state could grant the companies “eminent domain” authority to acquire the rest of the land.

Senator Rob Hogg, a Democrat from Cedar Rapids, backs the bill. “Basically what this does is to address the use of eminent domain by companies which are not public utilities and which do not have a duty to

serve Iowans,” Hogg says, “and which are not subject to the ongoing planning and supervision of the Iowa Utiliites Board.” Senator Julian Garrett, a Republican from Indianala, says he’s sensitive to the concerns of landowners, but he says if the bill becomes law, it might kill the projects.

“The provisions…in my view, discriminates against companies wanting to move products — whether it’s oil or electricity, in this particular case — through interstate commerce,” Garrett says. And Garrett says that makes the bill unconstitutional. “I’m just concerned that we’re stepping into an area here that probably would invite litigation,” Garrett says.

Senator Hogg defends the bill’s provisions. “They are not designed to kill a project,” Hogg says. “They are designed to safeguard landowner rights and the interests of the public.” Hogg says the bill won’t be ready for debate in the full senate until next week. Similar legislation is pending in a House committee.

Land agents are meeting with Iowans to secure voluntary rights to land for a proposed pipeline that would carry crude oil from North Dakota through 17 Iowa counties. The other project — called the Rock Island Clean Line — would carry wind power out of Iowa, to the east. Its route covers about 375 miles.