You are here: Home / Education / Branstad calls for adding key item to legislature’s ‘to do’ list 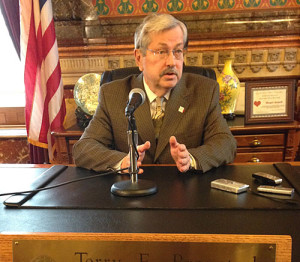 Governor Terry Branstad is challenging legislators to make a decision about state aid for Iowa’s public schools for next year.

“I think it’s critically important that we not have another fight next year over this same issue,” Branstad, a Republican, told reporters late this morning.

Democrats and Republicans have been unable to agree on how much more general state assistance should be forwarded to the state’s public school districts, but a tentative deal legislative leaders reached yesterday may resolve the impasse for the academic year that starts in three months.

“We don’t need to have another fight like this that’s going to extend the session next year,” Branstad said.

The governor said legislator should decide now — before the 2015 legislature session concludes — about state school aid for the following year as well.

“I recommended funding for both years and we’ve seen an extended fight which I think has been a very unfortunate situation that’s left schools with a lot of uncertainty this year,” Branstad told reporters. “We don’t want to see that repeated again next year and that’s why it is critically important that they indeed reach an agreement for both years.”

Branstad said he is reserving judgment on the tentative deal for the upcoming school years that would see districts get about $100 million more in state funding for general operations.