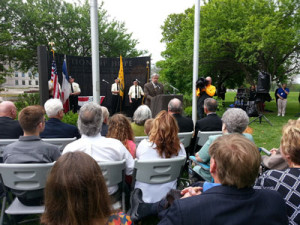 Governor Terry Branstad was one of the speakers at the ceremony,

A name was added today to the Vietnam Veterans Memorial on the Iowa State Capitol grounds in Des Moines.

Douglas Peterson of Fairfield was severely wounded by enemy fire in Vietnam in 1969 and although he survived for six more years, he ultimately died from those injuries.

Retired Iowa National Guard Colonel Robert King, now the executive director of the Iowa Department of Veterans Affairs, says it’s unclear how Peterson’s name was left off of the memorial for so many years.

Peterson’s name is the first addition to the monument since the memorial was dedicated in 1984. “Doug was severely injured in combat and returned back to the United States. He (underwent) numerous surgeries and operations at medical facilities across the country to try and help him. Despite the very best efforts of the very best and brightest, he died from his combat inflicted injuries six years later in 1975,” King said.

Peterson died at the age 25. King said it’s unfortunate that Peterson and so many other American soldiers weren’t properly honored 40 years ago. “They were in battle during a time when many in the United States were protesting war,” King said. “They did not come home as heroes and many times they had to endure horrible insults.” Peterson’s name was on The Wall in Washington, but a long paper trail complicated his inclusion on the monument in Iowa.

Peterson’s sister, Karen Vorhies, spoke for the family. “It was a lot of paper work, trying to prove that his death was because of his injuries. D.C. did it, so you would have thought Iowa would have (added his name) sooner, but that’s fine, it’s done,” Vorhies said.

Douglas Peterson is now the 867th name on Iowa’s Vietnam War Monument. Since 2008, May 7 has been recognized as the official Iowa Vietnam Veterans Memorial Day. Retired Army Lieutenant Colonel Robert Myers was among the speakers at a ceremony today held in front of the monument. “The sacrifice that Doug made was for all of us and we shall never forget,” Myers said.

The Iowa Vietnam War Monument is constructed from black mirror-finish coldsprings granite, which is the same material used for the National Vietnam Veterans Memorial in Washington, D.C.