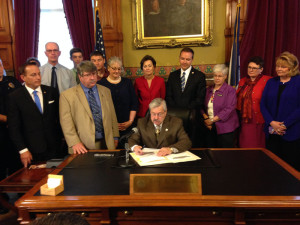 Governor Branstad has signed a bill into law that’s designed to help victims of domestic abuse, stalking, sex abuse and human trafficking who want to keep their address secret, so their abuser can’t find them.

“Often the victims live in a state of constant fear,” Branstad said during a bill signing ceremony in his formal statehouse office. “This bill takes the steps to protect victims…by establishing an address confidentiality program in the office of the Secretary of State.”

Victims will be able to get a new legal address, so they don’t have to list their home address when applying for a job, signing their kids up for school, registering to vote or taking some other action that requires disclosure of a home address — information a stalker or an “ex” might be able to find online. 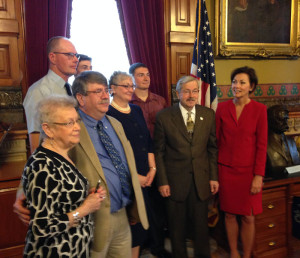 Judy Harberts of Holland, in Grundy County, was at today’s bill signing, because her daughter couldn’t. Harberts daughter moved to California, to escape a dangerous ex-husband. “She had a lot of issues and could not be safe here and so she moved there to be safe there and then after she got there, she found out about the program,” Harberts said.

Her daughter is now one of 3,000 women in California who have a post office box as their legal address, provided by the State of California. Harberts said victims who hear this story should seek out help — and sign up for the State of Iowa’s “Safe At Home” program.

“Hopefully Iowa will keep our abused victims safe, so that they don’t have to flee the state, so that they can stay here with family and friends and be close to home and yet still be safe,” Harberts said.

Iowa Secretary of State Paul Pate plans to have the program up and running by January 1st. Pate had asked legislators for $45,000 in start-up funds, but House Republicans balked, so he’s got to cut elsewhere to find the money to promote the program.

“We’ve got to be able to communicate with 99 counties, law enforcement, as well as the human services entities,” Pate told reporters this morning. “So that’s really what that (money) would be more for.”

Fines from offenders will cover the cost of renting the post office boxes the victims will be using as their legal address. About 1500 victims are participating in Minnesota’s “Safe At Home” program, while about 500 victims are signed up in Missouri. Pate can’t predict how many might sign up in Iowa — and he emphasizes it isn’t just for domestic abuse victims, but for people who’re being stalked or who were victims of child sex abuse and don’t want their abuser to track them down.

“Our work is cut out for us. We have to get the information out there to the people who might be able to use a program like this,” Pate said. “But there are also bigger issues ahead of this one even, and that is helping counsel these individuals so that they know they have choices in life and they know they don’t have to be a victim.”

The bill creating the state-run confidential address program for victims of abuse passed the Iowa House and Senate unanimously this year.