You are here: Home / News / Iowa GOP announces changes to move Straw Poll ‘back to its roots’ 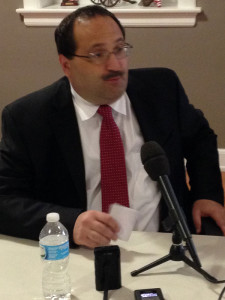 Leaders of the Iowa Republican Party say they’re addressing some of the complaints about the Iowa Straw Poll and they will no longer charge presidential candidates pricey rental fees for real estate around the venue.

The party will give each candidate who chooses to participate “free” tent space at the Central Iowa Expo grounds near Boone where the 2015 Straw Poll will be staged on August 8th. Iowa GOP chairman Jeff Kaufmann says the other “dramatic” change removes the pressure on candidate to feed their supporters because the party is bringing vendors with “State Fair” style food onto the site.

The first Iowa GOP Straw Poll was held in 1979, in Ames, with people sitting at picnic tables eating barbecue. Kaufmann says the party aims to revive the “spirit” of that first, low-key affair, although he is also hoping “tens of thousands” of people show up for the 2015 event.

“We believe that these reforms bring the Iowa Straw Poll back to its roots, back to why we are First-in-the-Nation which, after all, is what this is all about,” Kaufmann says. “We’re taking the lead and that is getting these candidates out in front of Iowans and letting them make their case, not who can serve the best pizza, not who can out-bid the other on the best lot.”

Tickets to the event will be $30, the same price charged for the 2011 Iowa Straw Poll. Kaufmann says party officials will decide which candidates are listed on the Straw Poll ballot and the list will not be limited to those who choose to participate.