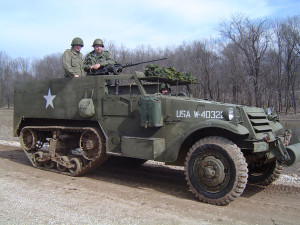 Next Saturday (May 16th) is Armed Services Day and a collection of vintage military vehicles will be in the southwest Iowa town of Atlantic to celebrate and to hold a sort of parade.

Steve Livengood is the organizer of the “Bada Bada Bing Bang Rally” and says the event at the former National Guard Armory will draw military vehicles and enthusiasts from across Iowa and several other states.

“I wanted to have it at the armory and the problem I’m having is, the armory parking lot is getting really full,” Livengood says. “I’ve got 10 Jeeps coming and you can pile those in a pretty small area but the half-tracks and the armored vehicles, they take up a lot of space.”

The smallest entry among the 28 vehicles is a military-issue motorcycle. The vehicles will be assembled at the old armory in Atlantic, now the American Legion Building, starting on the Friday before the event, but he urges gawkers to wait until Saturday. “You do not want to get run over by a track vehicle,” Livengood says. “We’re trying to keep the public out until we get the things positioned where we’d like to have them.”

The public can view the collection from 11 A.M. until 3 P.M. on Saturday the 16th and the rally begins at 3 P.M., when cannons will signal the start of the 5.6-mile cruise around town. Learn more at: www.atlanticiowa.com.