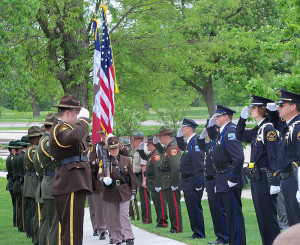 Four Iowa law officers who died between 1917 and 1945 were honored today as part of the annual ceremony at the Peace Officer Memorial south of the capitol.

“At this peaceful location, we take the opportunity to recognize the sacrifices that these four officers made in Iowa. They are typical of the kinds of things that officers do every day,” Ryan says. Ryan says the dangers faced by officers also weigh on others.”For those of us who personally know officers who have given their lives or their loved ones who survived them — the risks that the officers face each and every day are a stark reality for all of us,” according to Ryan.

She says losing an officer in the line of duty is something that goes beyond the circle of the officer’s family and the department. “Every loss of an officer is a loss to every one of us. Even when it is someone that we have never met, we feel the loss because we know the dangers that arise every day on the job, and often on the days off as well,”Ryan explains. “And our sworn personnel knowingly take on that risk with professionalism, dedication and determination,” Ryan says.

Ryan says the ceremony is one way the state can say thanks to officers. “The annual recognition is one small but very important way for us to acknowledge the sacrifice that each officer has given, and to recognize their bravery and commitment when they have given their for the job, ” Ryan says. “And to salute the valor of those left behind to carry out the law enforcement mission.” 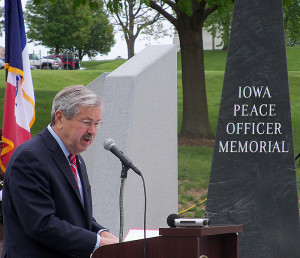 Governor Terry Branstad also spoke about the things officers face. “I know this is a difficult and challenging time to serve in law enforcement in uniform. And there are many unfortunate situations where the police are attacked and put in a very difficult situation,” Branstad says. The governor assured the officers their work is not forgotten.

“I want you to know that as the governor of this state that I respect and appreciate what you do, day in and day out, and that you risk your lives on behalf of the people of this state,” Branstad says.

Branstad presented a flag to the family members or department representatives of each of the four officers.

Those honored are: Knoxville Police Officer Albert Conrey, who died in 1938 after being beaten by an intoxicated couple; Cedar Falls Police Officer Everett Dutcher, who died in 1945 in an accident when the fire truck he was on was struck by a train; Pottwattamie County Sheriff’s Special Deputy Claude Dail, who died in 1932 while training to use a weapon; and Osceola Police Deputy Marshal Richard Eggleston who died in 1917 when a wall fell on him at a fire.