You are here: Home / Crime / Courts / DPS commissioner says training for use of force is a priority 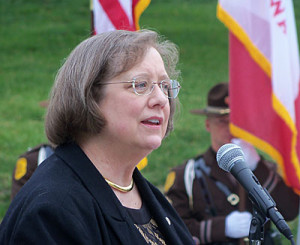 Fatal shootings by police officers in recent weeks and months have shined the spotlight on the actions officers and the use of deadly force. Iowa Department of Public Safety Commissioner, Roxann Ryan, says while the issue has gotten more attention in the media lately, it’s not a new issue for DPS.

“Well we always care about that, whenever there’s any kind of use of force,” Ryan says. “I don’t think it’s change for law enforcement, I don’t think it’s changed at all. And I think there’s a lot of misunderstanding about that.” Ryan says using force is a key part of training. “We spend a tremendous amount of time doing training for law enforcement officers and sometimes that plays out the way we intend for it to play out from our training,” Ryan explains. “Sometimes people are unpredictable, so it’s very difficult to look at each individual decision and talk about how it could have gone, because the officer is making split-second decisions.”

Many incidents are now caught on camera with everyone carrying cellphones and other devices. But, Ryan says officers don’t have the advantage of viewing footage when responding to a tense situation. “This is not like television where you get to replay, over and over and over. Or where you have multiple cameras and multiple microphones where you get to pick up everything that’s happening. It’s not staged,” Ryan says.

She says that’s why the majority of their efforts are spend on training for the potential use of force. “So that we can anticipate a lot of different things that we might encounter,” Ryan says. Ryan says the public misperception comes in, when something is shown over and over on television. “I think a lot of times what appears on video, and what appears on audio, doesn’t really capture the whole picture,” Ryan says. Ryan made her comments to Radio Iowa Friday following the Peace Officer Memorial ceremony.