You are here: Home / Fires/Accidents/Disasters / Governor to tour tornado damage in Lake City 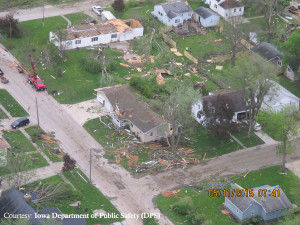 Governor Terry Branstad will tour tornado damage in Calhoun County later today. “To those living in the storm-affected communities, I want you to know that the state stands ready to assist you in any way that we can,” Branstad said today during his weekly statehouse news conference.

Last night, Branstad authorized the dispatch of a team of state-paid local contractors with chain saws and trucks to reopen a blocked highway so emergency crews could get into Lake City.

“Initial damage caused Highway 175 to be blocked, but about 2 a.m. this morning the road had been cleared and reopened to traffic,” Branstad says. “The saw team that began work last evening did an exceptional job. This morning a new saw team will be in town, helping to clear more debris.”

Power was out in Lake City and other areas hit by the tornado. Emergency 9-1-1 service in much of Calhoun County was also disrupted.