You are here: Home / Fires/Accidents/Disasters / Lake City mayor says it’s a ‘miracle’ no one injured by tornado 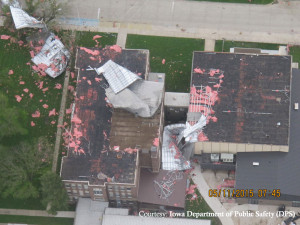 The roof was damaged at the South Central Calhoun High School in Lake City.

Clean up efforts are underway in the Calhoun County town of Lake City after an apparent tornado struck last night. Gary Fahan is mayor of the community of 1,700 in west-central Iowa, where no serious injuries were reported and volunteers are fanned out, tackling a host of chores.

“We’ve got 50 to 70 people in already and of course, all the fire departments in a 20-mile radius are here,” Mayor Fahan says. “We’ve got the SAW crew from the state in here, clearing the main roads going in any direction. MidAmerican is in here on electricity. It may be midnight tonight, they’re hoping to get juice back into town.”

Fahan calls it a “miracle” that no one was hurt as the storm hit about 7:30 P.M. while an awards ceremony was underway at the high school with perhaps 150 people in attendance. 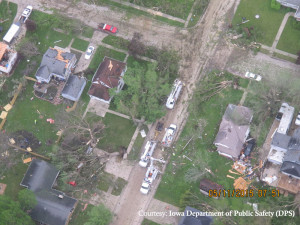 “They had baccalaureate going on at the high school in the auditorium and it took the roof off of the auditorium but the kids and everybody got down into the basement and they all come out unscathed,” Fahan says. “We’re thankful for that.”

Fahan says Governor Branstad will be in town this afternoon to survey the damage. The governor’s office has declared a state of disaster emergency for Calhoun County. Volunteers who want to help in the clean-up effort are asked to meet at the Lake City fire station.