You are here: Home / Fires/Accidents/Disasters / Lake City trying to clean up after tornado 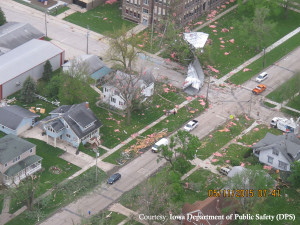 Clean-up is underway in the west-central Iowa community of Lake City which was hit by a likely tornado around 7:30 last night. Witnesses say the twister was a quarter-mile wide and skipped through a few city blocks in that community of 17-hundred, uprooting trees and damaging homes.

Meteorologist Mindy Beerends, at the National Weather Service office in Johnston, says a team of experts is working to confirm it was a tornado.

“Spotters confirm a tornado touching down in the southern portion of Calhoun County and moving through and hitting the Lake City area,” Beerends says. “We are sending storm survey individuals out there today to determine the extent of the damage and likely the strength of the tornado with that.” 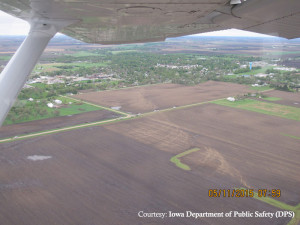 Patterns in the soil that appear to be from a tornado in Calhoun County.

South Central Calhoun High School in Lake City was badly damaged when the storm ripped off its roof. Beerends says it’s very fortunate there was a warning sounded of perhaps two minutes in advance of the tornado. “What we have heard is there was an awards ceremony going on in the evening with many people in the high school,” Beerends says. “They heard the warning and they were able to get them down into the basement and to safety. We’re definitely glad no one has been injured or any fatalities or anything of the sort with this tornado.”

As many as 150 people were in the school’s auditorium before the twister struck and none of them were reported hurt. She notes, the storm was very powerful and caused moderate damage elsewhere. “We did have 80 mile an hour winds reported west of Glidden in Carroll County,” Beerends says. “There was also significant hail, baseball- to softball-sized hail, that hit towards the Lake City area after the tornado had occurred.”

There’s a report of a second tornado touching down in Iowa last night — in southern Pocahontas County. Beerends says a Weather Service survey team will also be looking for signs of that twister today, though there are no reports of any injuries or significant damage in Pocahontas County.