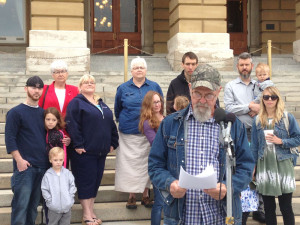 A landowner from southeast Iowa today said he has recorded proof a land agent for the proposed Bakken Pipeline offered to get him an 18-year-old prostitute if he’d grant access rights to his property so the pipeline may pass through.

A spokeswoman for the pipeline developers issued a written response this afternoon.

“We are aware of allegations that have been made concerning the conduct of an employee of one of our contractors,” said Vicki Anderson Granado, media relations coordinator for Energy Transfer Partners. “We take these types of matters very seriously and are investigating further.”

Hughie Tweedy of Montrose said he recorded two of his conversations with the land agent.

“On these recordings you will hear evidence of my senior pipeline representative offering me not once, not twice, but three times the sexual services of a woman,” Tweedy said, “the last time being a $1200 teenage prostitute.”

Tweedy held a news conference on the steps of the statehouse this morning to make the allegations, with his family standing behind him. His state senator was also in attendance. Tweedy told reporters he had planned to hand copies of the recordings to reporters today, but his lawyer advised against it since Tweedy may file a lawsuit against the company. Tweedy said he’d turn the recordings over to the state’s attorney general if the Iowa Department of Justice plans to launch a criminal investigation of the company.

“If an old junkyard dog like me was offered the sexual services of little girls to get my hackles down, I wonder what was offered to the powerbrokers of this state to gain their support for silence,” Tweedy said. “Shame, shame, shame.”

Tweedy said he decided to go public with his allegations to spur legislators to pass a bill that would make it more difficult for the pipeline to seize property for the project. The bill is eligible for debate in the Iowa Senate. It would require the pipeline’s developers to pick up the legal tab for landowners who can’t afford to hire a lawyer to go over land lease contracts.

“It’s time for all Iowans to choose sides and voice which side of history they’re on,” Tweedy said. “It’s time for our elected leaders to come out of the shadows and go on record and choose between the rights of Iowa property owners or the profits of private corporations.”

Tweedy, who described himself as a libertarian, told reporters this was no “rogue” land agent.

“Here is a quote from my recordings: ‘My family, my grandfather started the company, helped start the company back in the late ’80s and my grandfather, mother, my best friend, brother — we all work for ’em.’ End of quote,” Tweedy said during the news conference.

Tweedy first met with this man last fall. This month the pipeline company has twice asked deputy sheriffs to accompany land surveyors to Tweedy’s property in Lee County and Tweedy said they told him it was because they’d heard his property had been “booby-trapped.” Tweedy called it “intimidation” from the “pipeline mafia.”

“From the beginning I’ve been treated like a hick and a fool,” Tweedy said during today’s news conference. “I very well may be a hick, but I am no fool and I don’t think most Iowans are…Do not be fooled. This is exactly how they do business.”

Tweedy has been a vocal opponent of the pipeline. His farm sits not far from the Mississippi River and the proposed pipeline route would cut through timber on his property. A documentary crew in Lee County this past March videotaped Tweedy and others as they discussed their opposition to the project.

Iowa law prohibits the recording of conversations in which one is not a participant, however someone directly involved in a conversation may record it without seeking the consent of the other individual or individuals involved.

(This story was updated at 4 p.m. with additional information.)