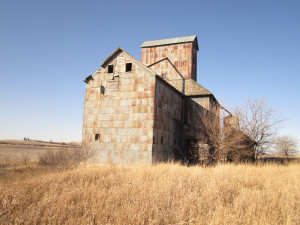 At the county fair, a carny might attempt to take your money and offer a prize for guessing your weight. In the Audubon County town of Ross, you could be rewarded for guessing the weight of the last wooden grain elevator and help to save it.

Bob and Janet Nelson, owners of the 130-year-old elevator, have been raising money to help restore what appears to be the oldest wooden elevator that’s still standing in Iowa.

Bob Nelson says the elevator in Ross was built in the early 1880s by Civil War veteran, Capt. Charles Stuart, who also founded the town of Stuart, Iowa. Nelson says a family who has owned the elevator since the 1930s offered him the chance to buy the structure with hopes that it would be restored to the best possible condition.

The elevator was constructed when the railroads were built, shortening the length of time it took to get crops to market and making a spot where people could gather to socialize. “The elevators were not only a place to buy crops or sell crops, it was a place where you could sit and you could talk to your neighbor. The people back in the 1880s, they were scattered all over the county,” Nelson says.

Wooden elevators typically were built to last 40 years, but more often than not, they were destroyed by fires created by sparks from passing railroad steam engines. They usually lasted no more than 10 years. A fundraising effort has allowed enough money begin the process. The effort began, according to Nelson, after they received a $25,000 grant from the Iowa Barn Foundation. The grant required matching funds, which Nelson has been able to accomplish.

He says it won’t be enough to completely cover the cost of restoration, so a contest is being held to guess the weight of the structure as it’s lifted off the limestone foundation, which has collapsed on three-sides. The foundation is the first thing set to be restored. The weight of the elevator, which is roughly 25-by-30 and 60-feet high, will be measured by specially calibrated heavy-duty equipment.

Nelson says people that want to guess the weight of the elevator can do so by donating when they log-on to the website www.saverosselevator.com. The structure is scheduled to be lifted-off the foundation next week, weather permitting. The person with the closest guess will have a plaque with their name displayed inside the elevator, once restoration work is completed.