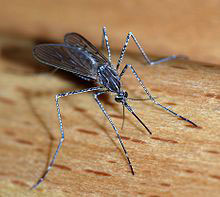 Dr. Yogesh Shah claims some increases in mosquito-borne diseases are due to climate change.

The fifth annual Iowa Climate Statement is being released, proclaiming climate change is real and humans are contributing to the greenhouse gas emissions in the atmosphere. The statement contains the signatures of 188 faculty members and researchers from 39 Iowa colleges and universities.

“There’s an increase in number of allergens and the seasons of allergies,” Shah says. “Because of the increased air pollution, there’s an increased number of asthmas in our children, going to the ER visits. We are seeing more vector-borne, meaning mosquito- and tickborne-illnesses, which were either not here or they are new to us.”

Shah, a founder of the Heartland Climate and Health Consortium, says some health issues are related to an increase in the mosquito population, which is caused by increased temperatures and carbon dioxide gas. He says for every degree rise in temperature, the number of mosquitoes multiples by eight-to-ten.

“And with all of that, we are seeing higher number of West Nile viruses,” he says. “We are seeing cases like chikungunya coming from other states to us, and more dengue.”

Signers of this year’s Iowa Climate Statement want 2016 presidential candidates visiting Iowa to be asked about climate change as part of the vetting process.