You are here: Home / Crime / Courts / Iowa part of cramming settlement with Sprint and Verizon 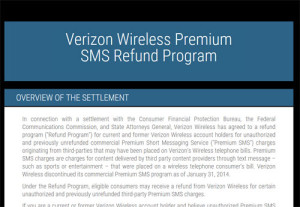 Verizon and Sprint have set up websites for cramming refunds.

Iowa is part of a national settlement with wireless phone companies Sprint and Verizon where they will pay refunds to customers for unauthorized charges on cellphones.

Geoff Greenwood, the spokesman for Iowa’s Attorney General, says the companies have agreed to pay 158 million dollars in the settlement.

“They along with other wireless carriers have engaged in what we call cramming. Cramming occurs when you see charges on your bill for premium services — that could be like horoscopes or sports scores — something that you didn’t ask for, but none-the-less you are paying about 10 bucks for the privilege of these services,” Greenwood says.

“Through the settlement, the companies were required to establish websites. Consumers need to go onto those websites and apply for refunds,” Greenwood says. “First they need to determine if they are eligible, and then they apply for the refund.” This is another in a series of settlements. “We now have settled with the top four wireless carriers in the country,” according to Greenwood. “This affects a lot of customers. A lot of people — nationwide and across Iowa — have been subjected to these cramming charges over the years. It’s just wrong, it’s something that we’ve gotten complaints about for a long time, and it’s something that we’re stopping and it’s resulting in refunds to consumers.”

While this covers the top wireless providers, there are other providers out there and Greenwood advises everyone to keep an eye on their bills. He says you should check to make sure there is not a charge on the bill you don’t recognize. “That is a red flag and that is what happened here.”