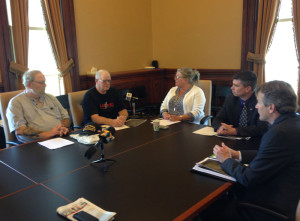 An April 9 traffic accident in eastern Iowa that killed five young people ranging in age from 12 to 21 is sparking upgrades to make the intersection safer.

Two men who often negotiate that turn at a curve along Highway 150 near Urbana met with an Iowa DOT official today in Des Moines. Ernie Jacobson of Urbana collected over 1500 petition signatures after the accident from people in the area who want changes at the intersection.

“This intersection has been bad for, well, since I’ve lived there 40-some years,” Jacobson said. “The traffic has picked up enormously, especially in the last few years. I’ve had three or four near-misses out there myself and a lot of people have.”

The April accident also motivated Jim Bixby of Center Point to get involved.

“The governor wants Iowans to stay in Iowa,” Bixby said. “If we keep killing them off, that’s not going to work out.”

Steve Gent, the director of the Iowa DOT’s office of traffic and safety, met with the two men at the statehouse and began by expressing his sympathy to the community.

“This hurts all of us a lot and we take this kind of thing very serious,” Gent said.

Gent outlined the DOT’s “short-term” fixes for the intersection of Highway 150 and 55th Street west of Urbana. By mid-June, the DOT will paint the pavement to create an island, so drivers will be better positioned to see on-coming traffic and make the turn. A brighter, fluorescent sign is also being installed to alert traffic on the highway to slow for the intersection.

“When you put up a sign like that, what we hope is the driver takes the foot off the accelerator, puts both hands on the wheel, puts the phone down and is an active and alert driver,” Gent said. “If they are, they’re a safe driver and then if something happens, they can maybe avert it.”

Gent told the men a long-term fix should be under construction in mid-2017. It involves the purchase of land and a new design for a four-way stop at the site.

Representative Dawn Pettengill of Mount Auburn arranged today’s meeting at the statehouse and she complimented the DOT for taking action. Jacobson is the man from Urbana who presented Gent with hundreds of petition signatures seeking improvements.

“It wasn’t just Jim and I. It was a whole lot of people. It’s not about Jim and I and Dawn. It’s about everybody on there — and the kids,” Jacobson said to conclude the meeting. “If they died for nothing, what a waste.”