You are here: Home / News / Isle of Capri breaks ground for Bettendorf casino 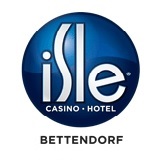 Construction is now underway on the first land-based casino in the Iowa Quad Cities. Ground was broken in Bettendorf on Wednesday for the Isle of Capri which has been based, for years, on a large boat moored in the Mississippi River.

Casino president and CEO Virginia McDowell says it’ll be nice to get off the river, which is how gambling started in the Midwest.

“Eventually, we were able to go to a ‘boat in a moat’ or become land-based,” McDowell says. “This is a fabulous opportunity for us because it’s what the customers like. The customers like one level and they like the ease and being able to find everything they want in one place. This is truly something that not only helps us, but it makes it a much better experience for our gaming customers.”

Beside the existing hotel, the company plans to spend $55-to-60-million to build a 35,000 square foot casino along with a new lobby, hotel desk, buffet, diner and bar. Construction should take about a year.

The Isle of Capri now employs 585 people and more will be hired when the new casino opens. Isle of Capri also operates casinos in Marquette and Waterloo.

Its competition in the Quad Cities includes the Rhythm City Casino in Davenport. That riverboat was an Isle of Capri property until a little over a year ago when Scott County Casino bought it for $51-million. It plans to spend $110-million on a land-based casino, hotel, and entertainment complex near the intersection of Interstates 80 and 74.