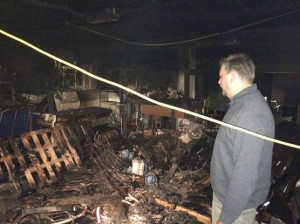 Camp Albrecht executive director Eric Veltstra looks over the damage from a fire which destroyed an estimated $100,000 worth of property.

Leaders of a northeast Iowa camp for people with special needs are scrambling to get the site ready for campers after a costly fire this week.

Eric Veltstra is executive director of Camp Albrecht Acres, which is located just south of Sherrill in Dubuque County. He told KCRG-TV that Wednesday’s fire caused more than $100,000 in damage to the main building and forced them to postpone a flea market fundraiser scheduled for tomorrow.

Even with insurance, there’s a lot the camp will have to pay out of pocket to replace. “There are always things that won’t be covered, so we’ll just have to go out and purchase things,” Veltstra said. The cause of the fire is unknown, but according to Veltstra, it started in the middle of a pile of items they had planned to sell during the weekend fundraiser.

Thousands of pounds of food stored in the building’s basement were lost. “It got too hot down here and the freezer shut down, so it’s all spoiled,” Veltstra said. The entire basement of the Kehl Center, the camp’s main building, burned in the fire. There’s smoke damage on the top two levels of the building. Veltstra expects they’ll have to professionally clean or replace everything inside the building.

But, he’s confident everything will be ready for the first camp session, which starts June 7. “Our campers look forward to camp all year. For a lot of them, it’s their favorite week,” Veltstra said. Donations to help the camp recover from the fire can be made through the organization’s website .