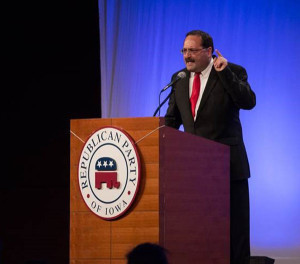 Nearly 1,400 Republicans gathered in a Des Moines banquet hall tonight to hear from nearly a dozen people who are likely to compete for the GOP’s 2016 presidential nomination.

After 11 speeches, an enthusiastic Iowa GOP chairman Jeff Kaufmann told the crowd: “This is like going into Baskin Robins and not knowing which flavor to take.”

Jim McDonald of Delhi eliminated a few from his list as he listened to tonight speech-a-thon, but he isn’t in a rush to pick a candidate.

The Iowa Caucuses will be held on February 1 of next year, but former Florida Governor Jeb Bush began his speech by focusing on a different countdown.

“There are only 541 days left for the end of the age of Obama and Hillary Clinton,” Bush said, to cheers and applause.

The GOP competitors mostly kept their verbal jabs aimed at the Democrats, but Kentucky Senator Rand Paul did emphasize his stand against the bulk collection of phone data, a position he acknowledged “does separate” Republicans.

“What have we learned tonight? If you’re a radical Islamist, you’ve come to the wrong meeting. Nobody here likes you,” Graham said, earning laughter for that comment and many other quips during his remarks.

Rick Santorum, the winner of the 2012 Iowa Caucuses, focused much of his speech on foreign policy — and he urged Iowans to choose a nominee who’d been tested by political battles.

“Someone who has the experience to go out and lay out how we’re going to solve these problems,” Santorum said.

Retired surgeon Ben Carson seemed to argue just the opposite.

“There’s so many different ways for people to gain experience and living in the real world is one of them,” Carson said.

“The announcement is going to surprise a lot of people because I cannot take the political nonsense any longer,” Trump said.

Former Texas Governor Rick Perry ended his remarks by recalling the trip he and his father, a World War II veteran, made to the cemetery in France that overlooks Omaha Beach.

Louisiana Governor Bobby Jindal, former New York Governor George Pataki and former Hewlett-Packard CEO Carly Fiorina also spoke tonight. Each of the 11 was given a 10-minute slot and Fiorina was the only one to go so far over her time allotment that her microphone was turned off before she concluded. The event wasn’t just speeches, though. Candidates like Wisconsin Governor Scott Walker hosted after-parties one floor down from the banquet hall.

“We’ve got cheese and we’ve got ice cream. We’ve even got a Harley parked on the side there, so we’re going to have a lot of fun,” Walker said as he concluded his speech with that invitation to his hospitality room.

People lined up to get Walker’s autograph. Walker’s campaign team had a DJ playing tunes and every so often giving away “cheese heads.” It was at the Iowa GOP’s 2007 Lincoln Dinner that former Arkansas Governor Mike Huckabee garnered early attention with an after-party that featured a Bill Clinton impersonator and Huckabee playing guitar with his band, performing “Born To Be Wild.”