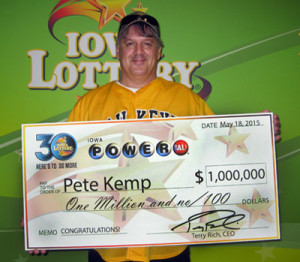 It’s easily the biggest prize Kemp has ever won playing Iowa Lottery games. “It think the most I ever won was seven dollars,” Kemp said. Kemp said he went to a convenience store on Sunday to check his Powerball ticket and found it was a big winner, but in the process of getting his paperwork from the lottery terminal, the clerk accidentally threw away his ticket.

Kemp was about to drive away when he went back into the store and retrieved his ticket, which had been torn in two. The winning ticket was taped back together. The 47-year-old Kemp, who’s a bus driver for Des Moines Area Regional Transit Authority, or DART, said he plans to use his lottery winnings for retirement, but also wants to arrange a gathering with his five children.

“I think a celebration is in order, if we can get everybody together,” Kemp said. No one matched all six numbers to win Saturday’s jackpot, so the big prize climbs to an estimated $121 million for Wednesday. Saturday’s winning numbers were: 24-29-38-48-52 and Powerball 32. The Power Play number was 2. Kemp’s ticket was one of four across the country that each won a $1 million prize in Saturday’s drawing.