You are here: Home / News / Colder than normal week ahead for Iowa 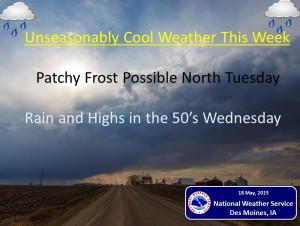 National Weather Service meteorologist Aubrey Wilkens says straight-line winds in Clarke County blew 80 empty railroad cars off of tracks south of Osceola. “We estimated the winds in that area were around 80 miles an hour,” Wilkens says. There have been no reports of injuries from the weekend storm damage and no indications of tornadoes.

The third full week of May will feature cooler-than-normal weather conditions. “Our high temperatures for most of the week are going to be around 10-degrees below normal,” Wilkens says. Parts of northern Iowa may see frost early tomorrow as lows dip into the low-to-mid 30s.

There’s also some rain in the forecast. “The next chances for rain will come on Wednesday, especially across the central and southern portions of the state,” Wilkens says. “Right now, we’re not expecting much in the way of thunderstorms, however, into the weekend we could see another round of thunderstorms.”

Slightly warmer temperatures, closer to normal for this time of year, are in the forecast for the Memorial Day weekend.