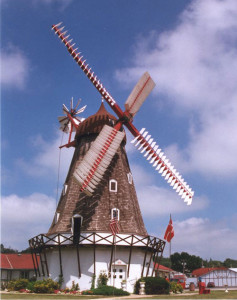 The small western Iowa town of Elk Horn is preparing to host an annual celebration of the community’s Danish heritage. One of the organizers of Tivoli Fest is Lisa Riggs.

“Tivoli Fest started 35 years ago. We named it after the largest and oldest amusement park in Denmark,” Riggs says. “It’s kind of a carnival, with fun things to do, food to eat and fireworks.” While there are some “kickoff” events on Friday, the official Tivoli Fest is scheduled for this Saturday and Sunday.

Elk Horn was settle by Danish Immigrants and incorporated as a town in 1910. Despite a population of around 650 residents, Elk Horn is still one of the largest Danish rural settlements in the U.S. “Around 46-percent of us still have Danish blood in us,” Riggs says. The town’s signature structure is a Danish Windmill that was built in 1848. It was dismantled and moved to Elk Horn 40 years ago.

Riggs is general manager of the Danish Windmill. “It was an actual mill that was used in Denmark,” Riggs says. “The farmers would bring in their grain to the mill by horse and carriage. It was used for the livestock grinding, for their bakery and for home use.” The windmill blades quit spinning late last year. Plans for repairs are in the works.

“Sadly, for the last eight months, it hasn’t been turning. We’re raising funds right now to get the windmill turning again into the wind,” Riggs says. Elk Horn is also home to the Museum of Danish America. One of the highlights of Tivoli Fest is the assortment of Danish foods, such as aebleskivers and medisterpølse, the Danish version of pancakes and sausage.