You are here: Home / News / Clinton reserving judgment on TPP until deal is final 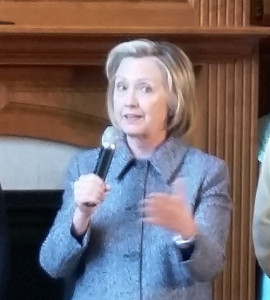 Hillary Clinton at an appearance in Mason City Monday.

Democratic presidential candidate Hillary Clinton took questions from the media today after hosting a small business forum in Cedar Falls. One of the questions is the same one posed to Republican candidates — is Iraq better off without Saddam Hussein in power? Clinton was in the U.S. Senate in 2002 and voted to authorize the war in Iraq.

“I’ve made it very clear that I made a mistake,” Clinton said. “…What we now see is a very different and very dangerous situation. The United States is doing what it can, but ultimately this has to be a struggle that the Iraqi government and the Iraqi people are determined to win for themselves. We can provide support, but they’re going to have to do it.”

Clinton had answered about a dozen questions from media outlets during the past month and reporters in Cedar Falls scrambled to quiz her on topics ranging from income inequality to the public release of emails she sent during her tenure as secretary of state. Clinton said she wants the State Department to “expedite the process” and release the emails as soon as possible.

“I want the American people to learn as much as we can about the work that I did with our diplomats and our development experts because I think it will show how hard we worked and what we did,” Clinton said.

Clinton also defended accepting memos about the security situation in Libya from a long-time Clinton confidant who reportedly was working on behalf of businesses hoping to land contracts with the new government in Libya.

“When you’re in the public eye, when you’re in an official position, I think you do have to work to make sure you’re not caught in a bubble and you only hear from a certain, small group of people,” Clinton told reporters in Cedar Falls, “and I’m going to keep talking to my old friends, whoever they are.”

Clinton talked earlier with a group of small business leaders and community bankers at a bike shop in Cedar Falls. One participant pressed her to comment on U.S. trade policy, specifically the Trans Pacific Partnership involving a dozen nations. Clinton said she wants to wait and see what’s in the final deal, but she generally favors trade pacts that improve U.S. competitiveness internationally and boost jobs and wages at home.

“Unless the American family and the American worker is strong, everything we want to see happen for our country is going to be much more difficult,” Clinton said.

Republican presidential candidate Mike Huckabee has been campaigning in Iowa today as well. During an early morning event in Cedar Falls, Huckabee criticized Clinton for evading questions from the media. Huckabee is visiting a central Iowa shooting range this afternoon.