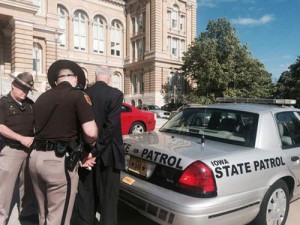 Former legislator Ed Fallon being escorted from the state capitol after his arrest.

A former Democratic state legislator staged a “sit in” inside the governor’s office Monday afternoon and wound up getting arrested when the office closed to the public at 5 p.m.

Last month Ed Fallon completed a 400-mile trek along the proposed Bakken oil pipeline and he met along the way with landowners who oppose the project.

“It just really deepened my commitment to doing everything I could to help stop the pipeline,” Fallon said.

Fallon went into the governor’s statehouse office early Monday afternoon and vowed to stay until Governor Branstad met with him and agreed to support a bill pending in the legislature that would make it more difficult for the pipeline developers to seize land along the pipeline route.

“I think the eminent domain legislation, while it certainly won’t stop the pipeline, it creates a more fair playing field, giving landowners some protections, some additional reassurances that their voices are going to be heard,” Fallon told reporters shortly after issuing a news release to alert the media of his intentions.

The governor’s legal counsel met with Fallon yesterday afternoon, but Fallon said meeting with the governor himself was his goal. Fallon was arrested and charged with criminal trespassing. Fallon, a Democratic governor himself in 2006, was among the “Occupy Wall Street” protesters arrested on the capitol grounds in October of 2011.

This Wednesday, a group called the “Bakken Pipeline Resistence Coalition” plans to stage another statehouse event to urge legislators to pass the bill restricting eminent domain authority for the project.