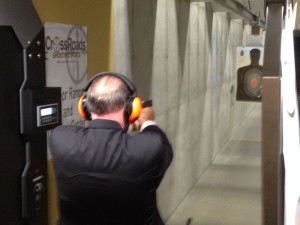 Mike Huckabee on the gun range.

Republican presidential candidate Mike Huckabee visited an indoor shooting range in suburban Des Moines this afternoon and he targeted Hillary Clinton during his remarks there.

“I would ask her why didn’t she answer the call of Chris Stevens four times when he was begging for help in Benghazi,” Huckabee said. “When an American is laying on the ground and in danger and Americans are being shot at and being threatened with death, it is the absolute duty of America to come to their aid.”

Huckabee used three different weapons at the firing range before speaking to the crowd and answering questions. Tom Hudson, the general manager of Crossroads Shooting Sports, held up the target Huckabee had been shooting at — showing the shots hit center.

“If you want somebody that you think might be on target, no pun intended here, with where we want to go with this country,” Hudson suggested, as the crowd cheered and applauded.

Huckabee told reporters after the event that he has not decided whether he’ll participate in the Iowa Republican Party’s Straw Poll this summer.

“Every campaign will have to determine how important it is to that campaign’s strategy,” Huckabee said.

Huckabee did participate in the 2007 Straw Poll during his first campaign for the White House.

“We did well. We came in second the last time and it was almost like coming in first,” Huckabee said smiling. “We’ll certainly determine whether it’s the best use of resources, but that’s the big question. You spend an enormous level of resources to participate.”

While Iowa GOP officials have decided the party will foot the bill for renting party tent space for each of the candidates and paying for all the electricity used at the Straw Poll site, campaigns will still have to consider buying the $30 tickets for their supporters, as well as providing food, beverages and entertainment to lure them to there.