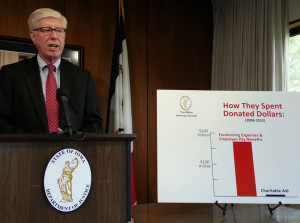 All 50 states are part of a federal lawsuit against four phony cancer charities. Iowa Attorney General Tom Miller discussed the case with reporters in his office today and said the operators are accused of scamming donors out of millions of dollars over several years.

Only roughly 5-percent of the money the charities collected ended up possibly helping cancer victims. “For the five year period, 2008 to 2012, they took in $187 million and paid out $5 million of that for legitimate charities,” Miller said.

The lawsuit alleges the telemarketers told donors their contributions would help provide pain medication to children suffering from cancer and pay for hospice care for cancer patients. Instead, the complaint alleges the defendants spent the donations on salaries, cruises, concert tickets, and dating site memberships, among other things. Miller said it’s doubtful all of the money that was donated to the phony charities can be recovered and directed to legitimate charities fighting cancer. “It’s not going to approach $187 million, but we’ll get everything that we can,” Miller said. “We also think that suing the individual personally is an important part of the remedy and deterrent.”

The complaint names Cancer Fund of America Inc., Cancer Support Services Inc., the president of these two corporations, James Reynolds Sr., as well as the CFO of both and the former president of Cancer Support Services, Kyle Effler; Children’s Cancer Fund of America Inc., and its president and executive director Rose Perkins; and The Breast Cancer Society Inc., and its executive director and former president, James Reynolds II.